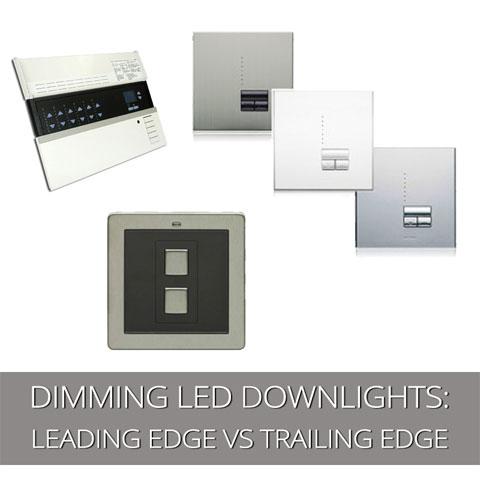 One of the main advantages of fitting LED downlights is that you can fit LED dimmer switches in order to adjust the amount of light in a room. Dimming lights are both practical and attractive as they can improve the look of a room by giving it a stylish ambient glow as well as being adjustable to suit different situations.

LED dimmer switches are an ideal choice in a child's bedroom for example to create a low night light effect to comfort a child and help them to sleep. It is also a useful choice in living areas as lights can be dimmed for romantic dinners or for watching television with a low background light but then raised again when reading or working in the same room.

LED dimmer switches work using either trailing edge or leading edge technology. Although they both operate by reducing the amount of energy to reach the bulb by trimming a section of waveform, there are some differences to the way in which they operate, their effectiveness and the type of lights that are suitable for each technology.

Leading edge dimmer switches are cheaper and simpler than trailing edge switches but have less features. Compatible with resistive or inductive loads, leading edge dimmers are most suited to use with incandescent or mains halogen lightbulbs.

Trailing edge dimmer switches are generally compatible with the majority of brands of LED lights. Although this type of switch is usually more expensive than the leading edge switches, they are a little more complex and have desirable features which tends to make up for the extra price paid out.

Trailing edge dimmer switches generally allow the LED bulbs to enjoy a longer lifespan through their smooth control and multi-way dimming features. They generally run silently and have a soft start, gradually reducing the voltage to zero rather than switching it off all at once. These bulbs can get very hot however as the resistance applied generates heat as part of the process.

Varilight V-Pro dimmer switches now contain trailing edge and leading edge dimming modes. The leading edge is a synthesized version which can be programmed by adjust the knob in a specific sequence. This provides a universal LED compatible dimmer switch for the majority of lighting applications. The only limitation is that it can only dim up to 10 lights or up to 120W of LED per dimmer module. Or there is the V-COM series which has true leading edge mode and can dim up to 60 lights, so no matter how many LEDs you want to dim, we've always got a solution for you at Downlights Direct.