Here at Downlights Direct you'll find we stock many different types of lamps and light bulbs. Each lamp has its own purpose, cost and energy usage. Please browse our range to find our more about the most common and most popular types used to date.

What is an LED bulb?

An LED bulb is a low energy light bulb (also known as a lamp) that utilises one or more light emitting diodes to produce light. Unlike other types of lighting technologies such as halogen and incandescent, LEDs don’t generate much heat which means that almost all of the energy that is consumed is used in light and not heat.

Halogens waste around 90% of their energy consumption in heat. This is a key reason why LED has now taken over as the #1 lighting technology in the World in such a short space of time.

Do GU10s need an LED driver?

No, if you have a GU10 lamp that is halogen, CFL or LED they all operate directly mains voltage. The LED driver is built directly into it.

Which Colour Temperature for a Light Bulb?

Although this is one of our most frequently asked questions, the choice is yours as it is a matter of taste. However, using my infinite wisdom and drawing upon my years of selling LED lighting here are some do’s and don’ts:

If you want a bit of a change and want something a bit clearer, then go for warm white 3000K. This isn’t as much of a leap in colour temperatures as cool white 4000K.

Unless you’re familiar with colour temperatures DON’T go for cool white 4000K in your living room. This is a room for relaxing in, a cool white colour temperature does appear brighter and clearer but it’s more clinical and cold. It doesn’t provide that relaxing warmth feel that warm white does. Although some people love the cool white effect, it does depend on how you use the room, create the colour tone you want, that compliments the activities you plan to do.

What is the Most Reliable Brand?

Philips Lighting have proven to be our most reliable brand over the last 10 years. Their failure rate is unbelievably low, less than 1 in 1000 units. Aurora and Crompton are also highly reliable as well. Our high quality branded LEDs offer much longer life expectancies and guarantees than unbranded versions, without costing too much more.

The Philips GU10 MasterLED now has a life expectancy of 50,000 hours! That’s over 45 years if you use them for up to 3 hours per day. It’s really worth considering paying a little but more for LEDs like these and also comparing the guarantee periods on offer. If a slightly cheaper unbranded LED has a short guarantee period of 1-2 years, then you should be wary of the quality and confidence that the manufacturer has in its own product.

Most of the LEDs we offer are dimmable as standard. This had become an increasing trend in recent years and almost every manufacturer in the industry was moving towards all LEDs being dimmable. But as prices of LEDs have fallen and profit margins have become tighter, the saving of around £1 for non-dimmable LED bulbs has become more important.

Many brands now have their premium offerings such as the Philips Master LED range and they also have economy ranges such as Master Value or Core Pro. Economy ranges tend not to be dimmable and have shorter life expectancies & guarantee periods.

We like to offer both premium and economy lighting products thoughout our range. We stock LED candles and LED light bulbs, with prices lower than £1, they are almost cheaper than halogen and cost less than CFL’s did. Quite an amazing turnaround in prices in such a short space of time. Which is yet another big plus for LED lighting technology, as price was always the main focal point.

Which Beam Angle is Best?

The majority of GU10 LEDs on the market have a beam angle of around 40 degrees. This is classed as a medium beam as it provides intensity and a decent spread of light. If you position downlights at 1 metre distances a 40 degree beam will overlap the nearest downlight and provide an even but bright light consistency.

The 60 degree beam is becoming increasingly popular as it allows downlights to be spaced further apart. This conjoined with a brighter (more lumens) light output spreads the light out more effectively and allows for fewer downlights to be installed. This saves on energy costs, component costs and means you don’t need to cut as many holes in your ceiling.

Saving Energy, but How Much?

This helpful energy comparison guide from Crompton Lamps, shows the differences between each type of lamp. It also shows the life expectancy, the first row for example shows the difference between an old-fashioned 60W light bulb with 1,000 hours, a halogen with 2,000 hours and the energy efficient LED with 15,000 hours.

In terms of life expectancy 1 LED lasts for the same time period as 15 traditional light bulbs. LED bulbs save you money in 2 ways: 1 in energy and 2 in re-lamping costs (also known as maintenance costs or TCO (Total Cost of Ownership)).

Video: LED Bulbs - What are They and Why Buy Them?

Here's a useful chart from Crompton Lamps that compares the wattage types and energy running costs from incandescent, to halogen to LED: 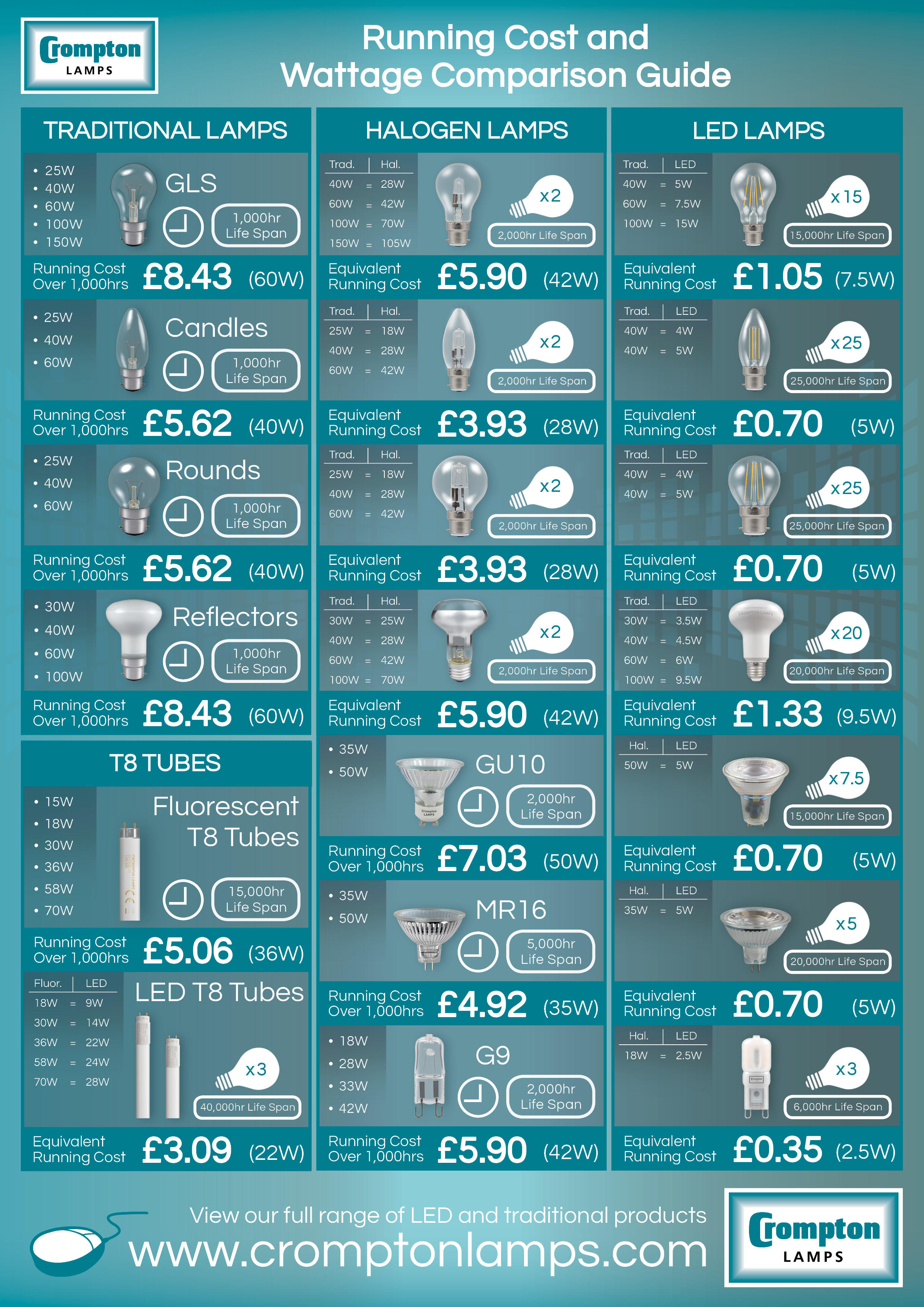