1.  What is an LED driver and how does it work?

LED lights operate on lower, more precise voltages than traditional lights such as halogen, and incandescent. They also operate on DC (Direct Current) rather than AC (Alternating Current).

An LED driver is an electrical product that converts the incoming mains voltage of 230V AC into DC and drops the voltage. DC voltage requirements for LEDs are mainly 12V or 24V DC which is classed as constant voltage. Some LED lights require a constant current supply which is usually 350ma or 700ma.

Most LED drivers have a standard mains voltage (230V AC) input but the output voltage needs to be specified when ordering.

This depends on which type of LED light or lights you need to power. If you're powering LED tape, you'll need a constant voltage led driver that has a 12V or 24V DC output.

Some led lights like LED ground and marker lights are constant current and require a 350ma or 700ma supply. These types of products also require specific voltages so it’s important to get them to match. When possible it’s better to use the manufacturers recommended products which will have been extensively tested to work with them.

Some manufactures don’t offer dimmable constant current LED drivers, if you’re looking for one and are not sure if it will work you need to follow these three rules:

C. Check that the voltage is correct. Constant current LED drivers have really strange voltage outputs, some have very wide ranges like 2-52 volts but some are very specific. If you’re connecting multiple lights to one driver you need to add up the required voltages of each and make sure they are within the range of the driver. If in doubt please contact us for advice.

3. Is it wired in series or parallel?

Constant voltage products are wired in parallel and constant current products are wired in series. If you’re wiring just one LED light to a constant current LED driver, the wiring is essentially the same as a constant voltage driver, but when you're wiring more than one lights you link them together like a daisy chain. The diagram below shows how to wire in series: 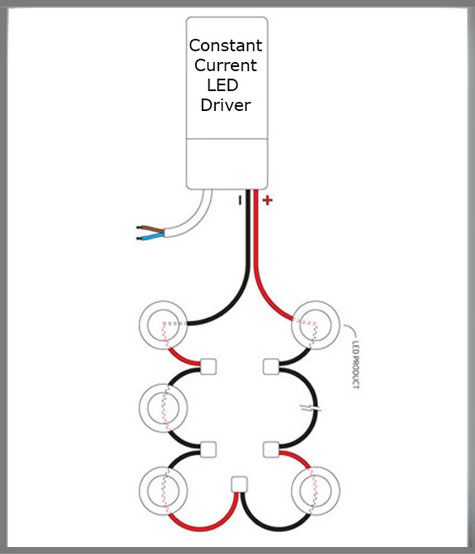 Constant Current LEDs must be wired in series. This ensures that a constant regulated current is provided to each of the LEDs on the circuit. The most commonly used constant current ratings are 350ma and 700ma.

4. Does my driver need to be water proof?

If you're installing it outside, then it should be fully water and dust resistant and fitted inside an electrical enclosure.

5. Will your dimmable LED drivers work with my dimmer?

It really depends on which dimmer switch you've got. For starters it needs to be either a leading or trailing edge dimmer switch and you need to make sure it's capable of taking the load.

We offer various LED compatible dimmer switches that work perfectly. The Varilight V-Pro series dims up to 100W of LED load or the V-Com series can dim up to 600W on one switch! Our mains dimmable drivers are also compatible with home automation systems such as Lutron, Lightwave and many more.

6. Can you supply other LED drivers that aren't listed on your site?

Yes, we can offer many other types of led drivers and we can even supply bespoke drivers that are made specially to order. These are available in dimmable or non-dimmable versions.

7. I want to dim colour changing LED tape, do I need a dimmable driver?

8. What is the difference between an LED driver and transformer?

An LED driver (or LED power supply) has a DC (Direct Current) output. The vast majority of LED lights require a DC input. A low voltage, which was used primarily with low voltage halogen lamps is AC to AC.

If it’s being mounted under a kitchen cabinet make sure it’s got screw holes so it can be mounted directly onto the surface.

10. How will it connect to the existing lights and will you need any other connector blocks or accessories?

If it’s a constant current LED driver we have a range of constant current connector blocks that help with wiring. For LED tape we have the 162 Series connectors which allows you to create a plug and play connection system. These are far better than using ordinary strip connectors.

How to Choose the Correct LED Driver for Your LED Lights