Available in various IP (Ingress Protection) ratings and colours. We offer a range of voltages and a large selection of accessories including LED drivers and controllers.

Our own brand of LED Strip Fit tape can be supplied to the exact measurements you require so there is no wastage and you don't have to solder cables or connectors when your installing it. Browse our range or contact us on 01706 521188 or email your requirements to [email protected].

LED strip tape is a series of small LED (light emitting diodes) chips that have been soldered onto a PCB (printed circuit board) and usually have a self-adhesive backing. One of the great advantages of using LED tape lighting is that you can cut it down to almost the exact length you need.

The other advantage is that it can be used to illuminate larger areas as the runs can go infinitely by adding more LED drivers and components. The only thing that stops you is your imagination.

LED tape has been available since 2010 and we’ve been successfully selling it for all these years. We have our own brand called LED Strip Fit that is available various light output types, IP ratings and voltages.

We sell this by the metre, i standard pack lengths or as a bespoke cut lengths for anything imaginable.

As part of our made to measure service we can supply LED strip tape to any lengths you need, just as long as it’s within the cut points of the LED tape you want. The cut points are usually 50mm or 100mm depending on the style and voltage you need. We are able to solder input tails, bends, connecting pins and just about anything you need.

We can also supply LED tapes pre-fitted into any of our aluminium profile rails and include an input cable to any length you need. This service helps you to install it faster and saves you or your electrician having to do the soldering yourselves.

For many years, the most popular LED tape in the UK was SMD5050. We've upgraded our most popular LED tapes to the newer high performance SMD2835 chip. This is 10% brighter and now has a higher CRI rating of 90CRI. This means it reproduces colours more accurately and offers a better, enriched quality of light.

The LED chips are 5mm by 5mm in size. This is still available in our 30 LEDs per metre version. The 30 LED version has a 7.2 watt energy consumption and the 60 LED version is twice as much at 14.4 watts per metre. Both versions are available in 12V or 24V versions.

With LED chips that are 2.8mm by 3.5mm in size. Although the physical size is smaller than SMD5050, these newer LED chip types are technologically more advanced.

We stock a variety of colour temperatures, which include the following:

The most basic of LED tape installations is with a plug-in laptop style LED power supply. This comes with a standard UK mains plug, cable and LED driver. The LED driver (also referred to as an LED transformer) converts the incoming mains 230V AC voltage into a constant voltage 12V DC output.

This type of LED power supply comes with a small male DC connector which plugs directly into our range of single colour LED tapes. There are many variations of this type of power supply but the one we stock is rated at 6 amps and 72 watts meaning it will power up to 5 metres of our 14.4W, 60 LEDs per metre tape or 10 metres of our 7.2W, 30 LED per metre version.

One of the downsides of this type of power supply is that it doesn’t come with mounting brackets so isn’t great for mounting under cabinets and is pretty clunky. But on the plus side it doesn’t require any wiring as everything is plug and play.

Hard wired LED drivers & controllers come in many more sizes giving you much more flexibility and are a must for longer runs. We stock the market leading Mean Well range which is as close to 100% reliable as you’re going to get, these things just don’t fail!
We offer a range from 20W up to 600W which can power up to 41 metres of our 14.4W LED tape on its own!

These types of LED drivers have a live (brown) and neutral (blue) input and need wiring into the mains. The output is positive (red) and negative (black) which needs wiring into the corresponding connections on the LED tape. This can be done by using strip connectors, 162 Series connectors, junction boxes and there are many other types of connectors on the market.

The most basic colour changing LED tape installation can be done by using the a plug in power supply and IR (infra-red) controller. The IR control box has a DC input that allows the power supply to be plugged into, just like a lap top. The RGB tape has 4 pins that plug into the control box.

Controlling is then done with the small remote control. As it operates on IR, you need to ensure that line of site is always available, just like with a TV remote. This remote allows you to easily change colours, set fade and strobe sequences and allows adjusts the brightness.
This is another plug and play system that is very easy to install and even easier to use. If you don’t have line of site between the IR control box and remote control then you’ll need to consider using an RF (radio frequency) controller instead.

Before the invention of TRIAC dimmable LED drivers that dim using an ordinary LED compatible dimmer switch, dimming LED tape had to be done using either a remote control or analogue 0-10V dimming. These options weren’t ideal as most people already had wall plates ready to accommodate a traditional dimmer switch.

TRIAC dimmable drivers have been around since 2013, solving this issue many years ago even though some manufacturers still don’t sell them. By using an LED compatible dimmer switch such as Varilight V-Pro (rated up to 120W) or Varilight C-Com for higher loads (up to 600W) you can effortlessly dim LED tape. 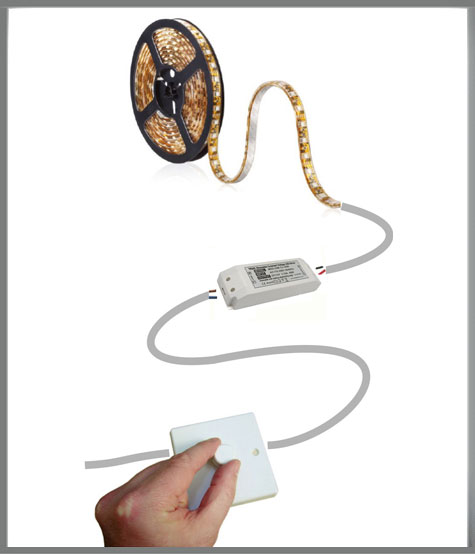 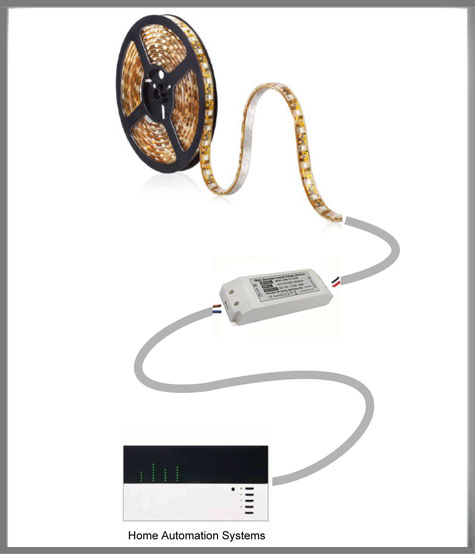 If you’ve got multiple runs of RGB colour changing LED strips or LED Rope light in the same area or property and don’t want to have a remote for every run, you can easily have just one controller that controls everything. All you need to do is wire each run to its own RF receiver and assign it as a zone on the controller.

This gives you more control over all of your RGB strips as it lets you control them individually or collectively at the same time by toggling the zones on and off. As an add-on to this range you can also purchase an RF to Wi-Fi hub which allows you to control them from a smart phone.

Each run requires an LED driver to provide the 12V or 24V voltage. The receivers can be set up as masters or slaves. Slaves allow you to combine multiple receivers so you can set them as a single zone.

Our range of RF receivers are also compatible with the RGBW and RGBWW LED strips with have 5 wires. They allow you to control each colour individually or mix any of them together. Our standard RF remote control has 8 zones. We also have wall controllers that can be used on the same system as the remote control.

Additional zones can be added and controlled from just one controller by installing more receivers. External lights such as ground lights can be added to the system by using a constant current receiver, the possibilities are endless!