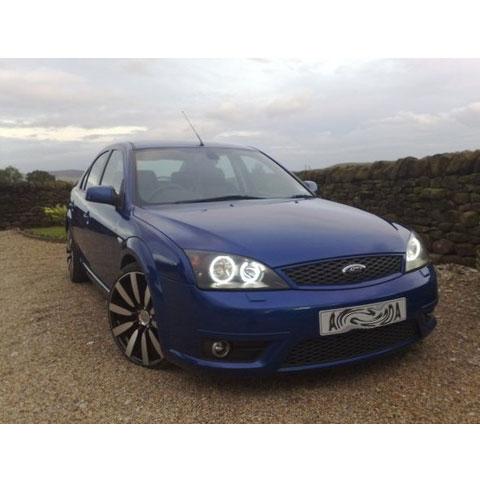 Ford has announced its first car with dynamic LED headlights, which according to them provide as much light as Xenon bulbs and last for the lifetime of the vehicle. Chief designer Chris Hamilton said: “For the new Mondeo we really wanted to exaggerate the slimness of the headlights, and LED technology allowed us to do that. That wouldn’t have been possible with a traditional halogen reflector”.

Ford lighting engineer Andre Baetz said that LEDs are dimmable. “It should be the main goal of a headlamp to provide the right amount of light according to the driving situation. If this requires dimming the lamps, it can be an advantage. The challenge is not to make headlights dim-able but to recognise the situation when it makes sense to dim the lamps. For example, less light is better suited in the bad weather conditions such as fog or rain.”

He went on to explain that there are other things LEDs can do that makes them a good idea for cars in particular. “[In] lighting, the objective is always to provide enough light to drivers at any possible situations for safety and comfortable driving without negatively affecting other drivers or pedestrians.

"The LED technology gives better possibilities to distinguish more in shape, colour and amount of light, which can be well recognised by other drivers and pedestrians.”

Because LEDs are low powered, Baetz has said that there might be a return to parking lights, “[Having your] parking lights on at night gave [us] a good reason to use LEDs for the position light / park functionality. LEDs enable a long-lasting lighting function at reduced power consumption.”

LEDs produce less heat than their halogen counterparts, so plastic internal lenses and components can be used. However, they do produce heat on a very small area, so Ford has fitted fans to its new headlights. They’ve said that they are confident that you could use your LED headlamps while stuck in 45 degree Celsius heat.