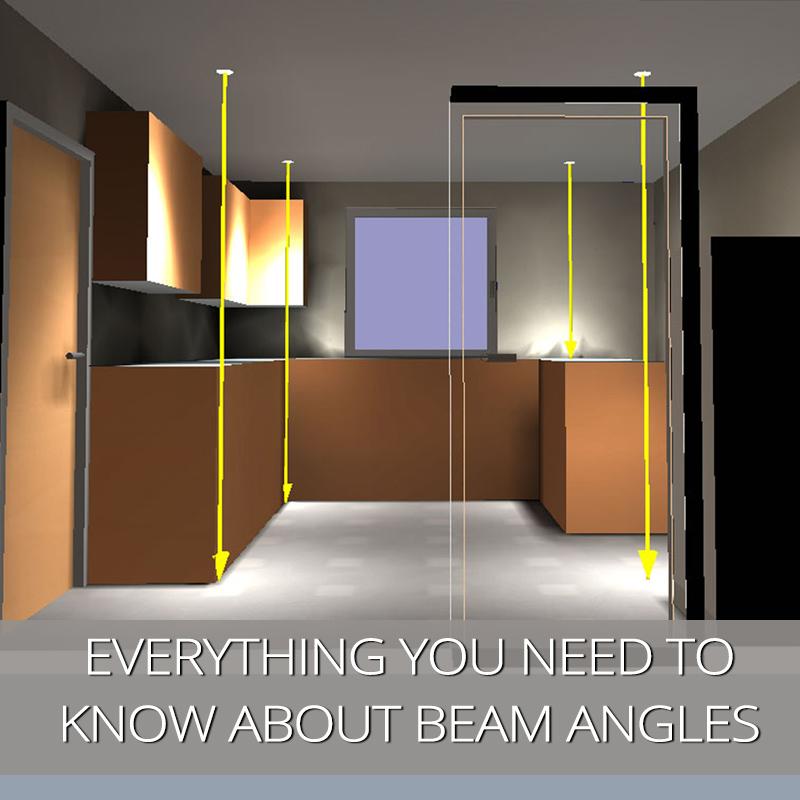 We all need the proper kind of lighting for our homes and workplaces. But choosing the right kind of lighting entails more than just thinking about the brightness of the light, its functionality, and its efficiency. There’s another aspect to choosing the right lighting which we should be thinking about if we want to maximise lighting in our homes and offices: the beam angle. So, what exactly is the beam angle, and what is its role and importance when it comes to choosing the ideal lighting for your requirements? Here’s everything you need to know about beam angles and their main impact on your lighting needs.

The fact of the matter is that every single light source – from the simplest candle to an LED light – will have a beam angle. Basically, the beam angle is the measurement of the light’s distribution. Just to give you a better idea: a standard light bulb will have a beam of about 360 degrees, and this means that the light shining from it will surround the area, but will not be very intense. Some types of lighting will have narrower beam angles than others, which results in more intense lighting, and this includes downlights, especially GU10 LED ones. The beam of such lights will often be approximately 40 degrees or thereabouts, with the beam angle not being more than 5 degrees more than the standard in the industry.

The facts on selecting lights with wider beam angles

If you select a light that has a wider or broader beam angle, you don’t necessarily benefit from a brighter light – you simply benefit from light that is more spread out. The brightness is still the same, although the intensity of the beam will increase. The brightness is measured in lumens, whilst the intensity is referred to in candelas. One of the aspects you should remember is that if you choose a broader beam angle, the light from it will not be that intense, and the centre of the light beam will not reach as far, either. By selecting the proper beam angle, the lighting can make a bigger impact in a room. 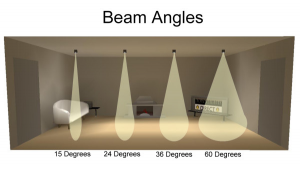 One other fact you should know is that it’s not just about wider beams or narrower beams – the distance from one light to another will also have an impact. If you choose four lights with 40-degree beams and place them two metres apart in a room, you may well end up with a dark, dim area in the middle of the room. You may think, “Okay, I’ll install lights with wider beams.” But this solution wouldn’t necessarily work, either. Even if you install four lights with 60-degree beams in the room, you may still have that dark, unlit area right in the middle. What then is the solution? It’s simple: rather than just use 4 downlights, increase the number of downlights to 9 so that you can have better light uniformity.

Where to use lights with broader beam angles

Well, for one, think of a lounging area. Lounging areas are perfect for wider beam angles since the area doesn’t need to be too bright – the usual tasks performed in a lounge area include such tasks as watching television, relaxing, or reading, so you don’t need lighting that is too focused or intense. On the other hand, narrower beams (around 25 degrees) are often better suited to rooms with higher ceilings, such as a library or a study room. For all the other rooms in your home or office, lights with beam angles between 35 degrees to 45 degrees will usually be suitable, but this would also depend on the light’s spacing and its application.

Which lights to choose

Actually, the best types of lights you can choose which will have the appropriate beam angles are LED downlights and GU10 LED lights. These types of lights don’t just come with the standard 40-degree beam angle – they are now available with a wider variety of beams, including 60 degrees.

If you have a large room which you would like to properly illuminate with the right beam angle, choose a light with a beam angle of 60 degrees. Even though the wider angle doesn’t give you much intense light, the light is more evenly spread throughout the room. Additionally, if you opt for downlights with 60-degree beams, plus higher lumens, you don’t have to install as many downlights in that particular room. The room will already have a more uniform look.

Other important factors to consider

There are other factors you need to think about as well. These include the average lux (also referred to as the brightness), the working plane, the reflectance, and, of course, the proper downlight. When it comes to lux, the lighting sector has some standard lux levels for different rooms in the home, including the kitchen (300 lux), the bathroom (150 lux), the bedroom (150 lux), and the dining room (100 to 200 lux). To ascertain the best lux level for a room, determine its functionality. What tasks are performed in that room? This will help you find the best lux levels for the different rooms in your home.

You should also take note of the proper downlights you need. For downlights, the highest lumen ratings are ideal, as are the lowest watts. This would be measured as lumens per watts. As a minimum, you should opt for 5W, which would be 50 lumens/watts. Large rooms can benefit from downlights with 800 lumens and beam angles of 60 degrees, which is what you would get with JCC Lighting’s FGLED10.

One last tip: it’s better to have bright downlights that have wider beams in large rooms, with dimmer downlights with 40-degree beams in smaller areas or rooms, as long as they are spaced close together.