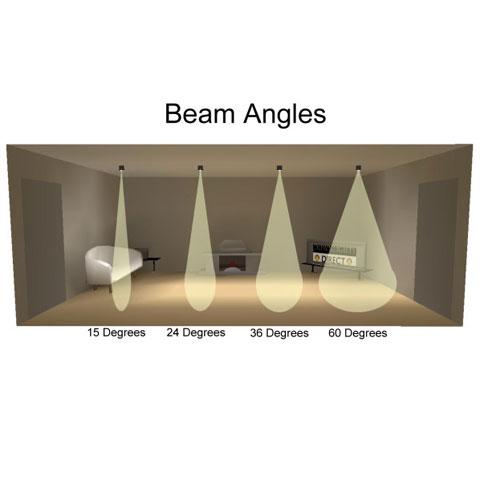 Which Beam Angle? & The 4 Key Factors

The standard beam angle (if there is such a thing) is 40 degrees. This is a medium spread beam that offers a good combination of intensity and coverage. During the days of GU10 halogens you didn’t get much of an option and if you’ve got any left in your home, chances are they’re 40 degrees.

GU10 LEDs and LED downlights are now available in a larger variety of beam angles. Wider beam angles like 60 degrees are becoming increasing popular. The main choice you have at Downlights Direct is whether to go for a 40 degree or 60 degree beam with some options available for narrow 25 degree beams.

A 60 degree beam can be used more effectively in larger rooms. Although the wider beam spread doesn't provide more light, it does spread the light out further. If you’ve got brighter, higher lumen output downlights this allows for fewer downlights to be installed while maintaining a good level of uniformity.

One of the main factors to consider when choosing the right beam angle is about the distance between each downlight. If you've got distances of 2 metres and have a 40 degree beam with a dim light output, here's what can happen:

This was a design we did using Relux to show what not to do. As you can see, the lights are positioned too far apart leaving a big dark patch in the centre of the room.

However, even when using a 60 degree beam, these lights are still too far apart shown in this image:

Although it's a big improvement, its still not perfect as their aren't enough lights in the room. Increasing the amount of downlights from 4 to 9 gives you what you need, great uniformity shown below:

If you’re installing downlights in a fresh ceiling space, you have the option to choose the best combination of downlights, beam angles and positioning. Some room shapes aren't suitable for 60 degree beams and work better with 40 degrees or sometimes more narrow beams like 25 degrees can work well.

Ultimately, your main aim in choosing the right beam angle is to get the best uniformity and to install the fewest downlights as possible. Uniformity means that your average lux levels are consistent throughout the room no matter whether your room is illuminated to 150 or 500 lux. Lux is a measurement of how many lumens there are per square metre on the working plane.

A working plan is the height at which you’re calculating your average lux levels from. The working plane of a kitchen would be the kitchen worktops which are usually 900mm (3FT). This varies from room to room, a hallway would be at floor level.

A room with a good uniformity will have no dark patches and also no hot spots. A dark patch is an area in-between 2 or more lights were the beams don’t meet or don’t overlap each other. A hot spot is a pool of overly bright light usually found directly below a downlight. For example; a room with poor uniformity may have an average of 300 lux but it is made up from pools of overly bright 600 lux directly below each light combined with dull patches of 100 lux between each light.

Luckily enough there is software available that does this for you such as Relux and Dialux but without having knowledge in lighting design, these programs aren’t easy to use and take a lot of time to learn.

If you can get that formula right it will give you a superb uniformity of 90% or higher is easily achievable in most rooms. But you also need to consider the 4 key factors:

The average lux level you want, or need to achieve. Strangely there are no legal regulations for correct lux levels in homes. Commercial rooms like offices need to be illuminated to a minimum average of 500 lux.

The lighting industry generally works to these average lux levels for homes:

Deciding on the best average lux level for your room depends on what you’re doing in it. The function of one family’s living to another family maybe totally different. Sometimes it’s good to make it a bit brighter and have the option of dimming the lights to the desired level, and then you’re totally covered.

The Right Downlights for the Job

The brightness of the downlight you choose is measured in lumens not watts. Wattage is a measured of how much energy it consumes; ideal you want the lowest watts and the highest lumens. The term for this is efficacy and is shown as lumens per watts. The minimum you should be aiming at these days is 50 lumens per watts. At 5W this would give you 250 lumens, although we have GU10 LEDs available such as the Aurora Enlite 5W Ice GU10 that are double this efficacy at 100 lumens per watt which is 500 lumens.

For larger rooms like lounges that don't need to be too bright (150 average lux), it's better to go for a brighter downlight with a wider beam. But don't got too bright and too wide or the lights might be too glary and dazzle your eyes.

The FGLED10 from JCC Lighting has been designed with this is mind, it’s bright at 800 lumens and has a wide beam angle of 60 degrees. Using this downlight in a lounge with a spacing of 2 metres is text book. The FGLED10 costs more per light but requires considerably less, saving you money on overall costs including installation time and wiring. Better still, your ceiling isn't scattered with too many downlights. The FGLED series has been replaced with the V50 downlight model which also has the wider 60 degree beam angle.

The combination of high output LED downlights with wider beam angle means you don't need to install as many lights to reach your desired lighting ambiance. This reduces overall costs of the components and of the installation.