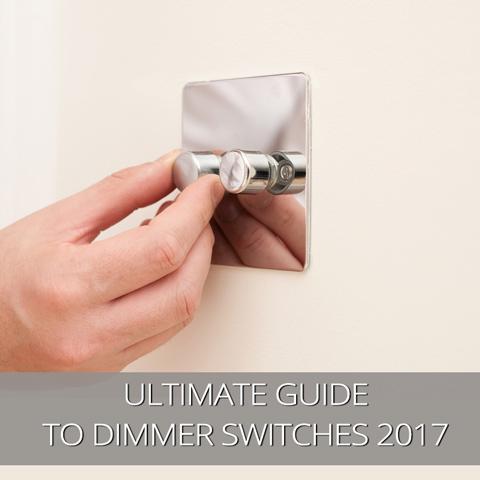 Ultimate Guide To Dimmer Switches In 2017

The ability to fine-tune the level of light that is given off by a fitting is highly desirable in many settings, not least the home. In the world of theatrical lighting, control systems are often used to bring up the intensity of certain lights whilst others are dimmed to create complex and dramatic effects.

In domestic applications, your ambitions for lighting control may be a little less ambitious, but you still ought to know the differences between the principal dimming systems used in the UK these days. After all, light fittings come in many different forms nowadays, such as LEDs, compact fluorescents and metal-halide lamps, and the humble dimmer switch is no different.

With so much choice on offer, the array can be bewildering. However, you can find out all you need to know about dimmer switch technology by reading our guide.

When dimming technology was first introduced into homes, a variable resistor was all that was used to regulate the amount of electrical power that flowed through a lighting circuit. Either fitted in a slider or a rotary controller, the resistor diverted energy that would otherwise flow to a bulb. Because many of these dimmers could be set at anything between zero and ten volts, this type of analogue dimming control system became known as 0-10V.

Dimming systems are designed to respond in a number of ways, so the setting of the controller is not always directly related to the perceived output light. Various patterns for the intermediate voltage settings can be achieved, for example relating to voltage output or power output rather than the perceived level of light which may differ somewhat.

This sort of technology is often used to dim the control ballasts of fluorescent lighting products. It can be found within some types of LED dimmer switch, too. Nevertheless, in most cases, there is a limit to the level of control that a 0-10V controller will provide, especially at the lower end of the output signal. For instance, it is commonplace to find that such a dimmer will only be able to go as low as ten percent of the power output. Although this is fine in most domestic situations, it does mean that a separate controller, or switch, is needed to power the LED array or fluorescent ballast off completely.

Despite this minor drawback, 0-10V dimming technology remains popular in homes and for professional lighting applications because it is simple and reliable.

In many people's eyes, the 0-10V form of analogue dimming control has been surpassed in recent years. Domestic resistive dimmers now tend to actually switch the flow of electricity on and off at very high frequencies to produce various levels of light perception. The more you turn a resistive dimmer up, the less time it is turned off for and vice versa. The key electrical component in a solid state resistive dimmer of this type is called a triode alternating current switch, or TRIAC for short.

A TRIAC dimmer switch makes use of semiconductor technology which uses an N-type material - that has plenty of free electrons - and a P-type material. The latter offers gaps through which the free electrons can pass. As a dimmer of this type is controlled by the user, so the number of free electrons passing through the gaps is manipulated. You can think of it like a gate which is either closed, partially open or fully open which regulates electrical flow. Sometimes, a TRIAC dimmer switch will emit a low-level buzzing sound when in use, particularly when they are being used at dimmer light levels. This is perfectly normal and not a sign of a faulty dimmer.

As the name implies, digital addressable lighting interface, or DALI for short, is a digital dimming control system. It is also an international regulation, known as IEC 62386, which sets a common standard for the control of electronic lighting ballasts, transformers, and LED arrays. DALI is one of the preferred standards for emergency lighting systems and is a fully-fledged digital lighting control management system. It is much favoured as an LED dimmer switch.

One of the advantages of DALI is that wires can be connected to any device, such as a DALI dimmer switch, without needing to worry about which is positive or negative. Along with supplying power to the light fittings connected to the DALI controller, the wires used allow for a bi-directional data exchange, rather like an Ethernet cable which is also carrying power. Because this means that light fittings can be 'talked to' by the controller and also 'talk back', the system offers a huge amount of flexibility. Depending on how it might be programmed, single or groups of light fittings can be controlled individually. Alternatively, you can use a DALI dimmer switch to either raise or lower the light levels over the entire network, in what is called multicasting.

DALI has been around for a few decades now and is often chosen because it has an open protocol. Therefore, you are not restricted to a single lamp manufacturer or control system. So long as the technical standards are observed, you can mix and match different types of lighting in your home and have them all controlled centrally.

Sometimes called DMX512, this dimming control system is often used in theatrical settings where XLR jacks are plugged into a central lighting console which can bring lamps up and down in intensity. Standing for digital multiplex, DMX is – like DALI – a system which does not use proprietary controls, so lots of equipment from different manufacturers can be used together.

A DMX controller tends to be used in particular applications for domestic use. For example, it is often seen controlling party lights or for an external Christmas display. However, it can also be used inside, especially in places like home movie theatres. Indeed, there is no reason that this form of theatrical lighting could not be used to control the dimming of lights throughout an entire house.

One of the latest developments with DMX lighting is that it has been adapted to run wirelessly. Although XLR cables remain the most common way for a DMX controller to communicate with light fittings, RJ45 jacks can also be used along with it. Now developers have taken this one step further and produced wireless transceivers which will allow DMX-enabled fittings to be controlled over a Wi-Fi network.