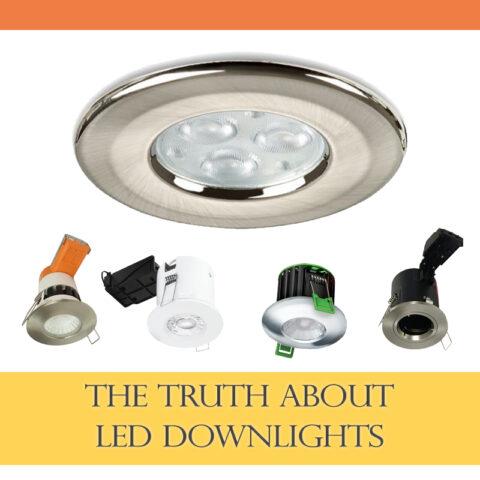 Life at DownlightsDirect.co.uk started a few years before LED downlights even existed. The most popular choice of downlight was the now outlawed 50 watt halogen. During our tenure as an online lighting retailer, we’ve seen many different types of downlight come and go.

To explain the truth, we must first compare the main types. The two main types of LED downlight are integrated and GU10.

What is an LED Downlight?

An LED downlight can be a completely integrated unit, or it can come in two parts. Ultimately, it's a low energy LED light source fitted inside a downlight housing.


Are LED Downlights as Reliable and Long Lasting as They Say?

Throughout our history, we’ve maintained our relationships with premium branded lighting manufacturers such as Aurora, Collingwood, JCC and Philips Lighting. Even these top-quality brands have had problematic versions of downlights.

The most consistent and reliable downlight of all-time is the Halers H2 Pro. This product was a game-changer for integrated LED technology. We’ve experienced the fewest failure rates with this product, its successfully outlasted its 7-year guarantee period and still remains a market leading product.

The least reliable downlights we’ve sold have been the Aurora I9 and possibly the JCC FGLED6. These particular downlights had a few ‘bad batches’ and unusually high failure rates. However, these brands have learned from their mistakes and gone on to develop more reliable products with the Aurora MPRO and JCC V50.

The truth about integrated LED downlights is that some models come and go quite quickly. This can be a problem if you get a failure and need to replace it. If your particular product has been discontinued then the latest version won't fully match the others.

On occasion, integrated downlights do fail and do need replacing but they are more reliable than the traditional GU10 LED and fire can combination which is the housing of the downlight structure shown in the image above.

If you buy downlights that don't have a wiring cable connector block you'll also have to disconnect them by rewiring them which will mean getting an electrician involved. If you've got downlights with proper plug-in wiring connectors shown below, you can easily disconnect them. Then you can usually reconnect the new one as it should have the same plug-in connector.

These connectors make integrated LED downlights work in a similar way to GU10. Instead of removing the lamp from the fitting, you're removing the fitting from the ceiling. No additional tools required!

What are the Best LED Downlights?

If you put a GU10 LED inside a traditional fire can downlight housing and have it on for long periods per day (3 hours+), you'll most likely discover they don't last for very many years and you'll be forever having to replace the LED. Overheating is the #1 cause of LED failure. If you're going to go for GU10, then choose a downlight with airflow like the Aurora EFD Pro, Ansell Edge or Integral EvoFire.

Integrated downlights feature advanced cooling capabilities. They have a dedicated heat sink that dissipates the heat more effectively, which helps to prevent heat from building up like it does inside a fire can.

Thanks for reading, this post was produced by Chris Horridge, the UK's downlight connoisseur.